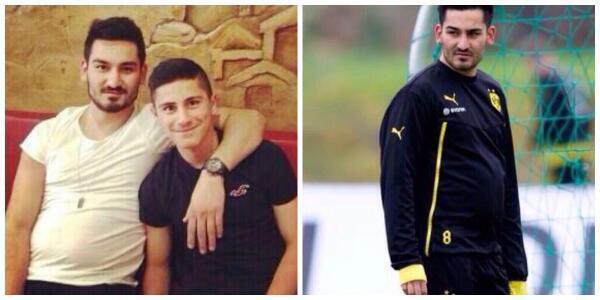 The guy in the picture above could look like a player of an amateur team almost at the end of his career, but instead he’s really İlkay Gündoğan, the young and strong Borussia Dortmund‘s playmaking central midfielder, who, despite having Turkish parents, plays for the German National Team as well, being born in Gelsenkirchen in 1990.

lkay was already much more than a prospect and was a key player both for BVB and for Germany: after starting his professional career at VfL Bochum, he moved to 1. FC Nürnberg, where he spent two very positive seasons (6 goals in 48 matches), and in 2011, when he was 20, was sold to Borussia Dortmund, a top German Club.
In the Club from Westfalia he had two very good seasons, winning Bundesliga and DFB-Pokal in the first one, thus being called up for German NT, but at the beginning of 2013/14 Season he suffered a very serious injury, and, because of that, he has been out for almost a year and has done a lot of physiotheraphy.
Despite being so seriosly injuried, İlkay Gündoğan have anyway been followed by important Clubs, such as SSC Napoli and FC Barcelona, but when the guy finally came back to the pitch to restart training with Borussia Dortmund, he looked quite different from the one that people remembered: he was 20Kgs above his usual weight.

We wish him to loose weight as soon as possible for his career, but anyway we like oversized footballers, and we wouldn’t mind if he came back as strong as he was before the injury, but keeping his extra chilos !

Here’s a video about Gündoğan:

Thanks to our Reader BaroneBirra for reporting us this fact.

We remember you that you can follow us also on the main social networks, so it’s easier for you to be updated on our latest post, and you can also find more stuff, such as pictures and videos.